The Tate launched their BT Tate Player (no disguising the sponsorship there, then) a week ago. I have to say, I’m disappointed. When I first heard that they were going to be doing this I got really excited about the potential, but the finally-launched-product is pretty much a nothingness.

Not to say that the content isn’t great – it’s fabulous being able to watch a video of Howard Hodgkin talking about his stuff and I suppose the tabbed view of Gilbert and George adds certain dimensions that you wouldn’t get otherwise – being able to link to pictures and other related material is a no-brainer which works alright. 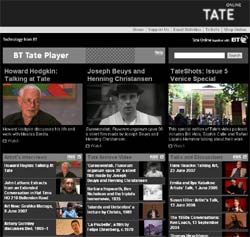 The thing that’s missing is any sense of community engagement, at all, anywhere. No comments, no rating systems, no discussions. In fact if I was being really mean (which I am when it’s lunchtime and I’m hungry) I’d say that the branding of a “player” implies something which does a collective something. This is just a page of videos linking into a Flash player. Strictly it isn’t “technology from BT” but “a web page including some HTML and a bit of Flash”. There’s some RSS in there, but hey, not exactly ground-breaking.

I’m not knocking the idea. It’s fantastic to see a gallery or museum doing video online (although at the Dana Centre we’ve been doing it for a fair time now using our, ahem, “Dana Centre Player”…) – it’s obviously the road ahead and it’s fantastic to see real artists talking about their work. In this way it does a good job at getting great content out to users. What I find annoying more than anything else about this is the amount of missed potential. It isn’t bad, but it just could be sooooo much better with ~really~ not much more work.

Interestingly I thought the same thing about the Tate Carousel – a “visual interface with Tate’s collection” (I won’t be sarcastic right now about what a “non-visual” interface into this particular collection would be..). It was almost really interesting, but then just wasn’t – it doesn’t actually do anything at all…

Following the launch of the “player”, Director of Tate Media, Will Gompertz said:

“..it’s an exciting project with limitless potential and we’re delighted to be able to share with a broader audience the original audiovisual content of the Tate Archive.“

So at least Mr Gompertz recognises that there is further potential in the project. With any luck this potential will be realised quickly and we’ll see phase II with some really nice community stuff going on, some tagging, embedding options, YouTube crossover, ratings, etc.

Right. I’m off to lunch before I start ranting at something else.