You know, this was never meant to be a space where I banged on about how best to bring up kids. Yet here I am, post #2, and I’m about to rant.

I was sitting upstairs in my office just now when my ears started pulsating with the sound of what sounded like a murder outside the house. Where we live is a long way from being unpleasant but I have discovered a mild addiction by passers-by to SHOUT a lot. Usually it’s at around 2am, when I really need to be on the ball the following day… 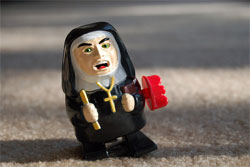 Anyway. The shouting continued, so being a top curtain-twitching kind of person, I snuck through to our bedroom so I could see what was going on. Across the road was a small boy, probably 6 or 7 years old, not being murdered, but screaming – and being screamed at – by his heavily-tattooed mother. I only caught the end of the argument and it had all got a bit heated by then but what happened next shocked me.

She didn’t hit him, or box his ears or anything physical.

Instead, she opened her bag, pulled out one of his toys, put it calmly on the floor…and stamped on it.

How appallingly cruel, and shit, and gutless is that? How much of a pit have you got to have crawled into in order to lose your rag that much at your child? What a completely stupid, fuckwit arsehole of a parent are you to be that far out of control?

Now, I haven’t got a 6/7 year old (yet). But I’ve got a 2.5 year old, and yes, he can test the patience of a saint at the worst of times. But always – always – there’s a sense of keeping control, having to rise above it, remembering that kids are still people, and little ones at that. Sometimes it’s hard – really hard. I’m not as good as I could be, and sometimes I lose it and shout when I really don’t mean to. But I have also learned that kids always test the boundaries, and a losing-the-plot type moment does absolutely nothing for anybody – in fact if anything it gives them more attention and makes it more likely that they’ll do it again next time.

Take what happens when you stamp on your childs toy, for example: Small boy goes apoplectic. Screams get louder and more obscene (he starts calling his mum a “willy”), mum stomps off down the street. Neighbourhood is treated to 5 minutes of boy lying on the floor crying before he heads off to do some more shouting. Street covered in broken-toy litter. No one wins. And that’s all the practical stuff, without even mentioning the damage done to the poor kids’ psyche.

Enough ranting. I hope it works out. But I’m betting after another 10 years of that, he’ll end up being the one kicking the shit out of someone else smaller than him.