A lot of talk is done around viral marketing, and a lot of hot air too. The most recent example for me was a senior marketing executive (who will remain nameless) who said “we just don’t have the money to do something viral”. This was so badly off the mark that I had to just bite my knuckles rather than blurting out something terribly rash.

Virality exists wherever there is excellent, quickly consumable, compelling content. Often this is around online games or interactives (which, granted, can cost money) but it is also the simplest of ideas which can pique interest to such an extent that they start the viral ball rolling.

Viral content gravitates around sites like b3ta. Be warned – if you have things to do, don’t go look at it. This is funny, off-beat, risque viral content. It’s usually fairly offensive, too – and that’s often what makes it viral.

As a museum, this kind of virality is probably always going to be out of bounds – or at least will be if the museum is the creator of the content. The furore which erupted around the VW Polo terrorist ad (“small but tough”) and the later news that VW were actually nothing whatsoever to do with it caused some interesting ripples in the world of marketing. I won’t be the first person to suggest that VW actually got some pretty nice – and extensively viral – coverage from it. Yes, in a “traditional” marketing sense, the VW brand suffered, but here in the real world, we saw a car that was strong, reliable, anti-terrorist and “the hero” (to quote one of the creators of the ad). Not to mention that the ad is actually pretty funny, and virally huge, too. 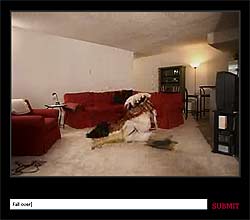 Subservient Chicken was set loose on the public back in 2004. The joy about this interactive is firstly that it is an extremely clever bit of tech (and for a long time it was easy to believe that the person in the chicken suit was actually reacting to your instructions in real time..). Secondly, it has connotations – implied, not stated – of very dodgy realtime porn chat rooms (or so I’m told ~cough~), which gives it a lovely risque, viral, edge. I’d love to see the logs for what people actually asked the chicken to do after getting bored with “wave”, “hide behind sofa” etc…The third thing which is somehow very important in this interactive is that the branding is very low key. The traditional marketing department approach would be to slap the logo over everything, but that’d immediately turn most of us off – Naomi Klein’s now infamous book No Logo articulated for many what they had been feeling for years – a saturation of brand values, overclocked marketing and too many large-chinned good looking people having a great time with their six-packs.

Another lovely example of what I’m going to call boundary marketing is Will It Blend – about the most inspired bit of marketing for a product as mind-blowingly dull as kitchen blenders as you could hope for. Here, pretty much anything (the iPhone is the latest) is put into one of the blenders being sold by BlendTec and the resulting video is posted on the site. It’s very funny, original, and a world apart from the kind of thing you’d expect from a “normal” blender brochureware site. Successful? Well, the upload on YouTube has been viewed 2.3 million times…I’d be fascinated to see how the competition fare, and also to get an understanding of how this increases sales for BlendTec. In terms of brand it does powerful things: awareness, coverage, repositioning of a blender company (of all things..) into a space that is amusing, amused, young, funky, willing to take a risk.

So – the inevitable question – where do museums fit with this kind of marketing approach? Well, for starters, marketing types who understand virality are still few and far between, especially in our sector. A typically conservative marketing approach (“do some leaflets and a poster or two, they’ll work”) is understandable where money is tight and impact needs to be understood. Virality can be enormous – but it can also fall on its arse, and it’s often easier to take less risk for less potential gain. Second, as I mentioned above, we as a sector are pretty risk averse when it comes to our “brands”. I’ve put this in inverted commas because I’d argue that a “brand” is a household name with values understood by the majority, and we’re not even close to this with our museums: “NHM”, “Science Museum” or “Tate” just don’t mean anything to people in the way that “Nike”, “M&S” or even “Currys” do. Does this mean we should take more risk? Well, I’d say so, but I’m not in the firing line…

As a sector we’ve done things which have been wildly successful and have had elements of virality about them. In the next post in this series I’ll take a look at some ways of measuring virality and hopefully start to unpick how we might be able to spend less and get more – the holy grail for museum marketing.