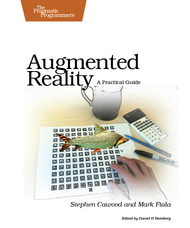 I love it when people as influential as Tim O’Reilly blog about stuff which really floats my boat. I’m an enormous fan of the concept of Everyware – the ubiquitous web – augmented reality – the spime – the whole notion of accessing the web from the “real” world, not just from a desktop PC.

Tim (my mate Tim. Ha ha. If I didn’t like what he had to say I’d call him “O’Reilly”..) mentions what looks like a great book called Augumented Reality: A Practical Guide. He goes on to post about the overlaying of the web on the real world and vice versa. This is exactly where the ubiquitousness of mobile devices is likely to take us, IMHO.

On what I thought was a similar vein, I got really excited this morning when I first saw myvu and figured (before I’d seen the really boring video) that it was going to be a kind of “personal HUD“. In fact, it’s “just” a pair of glasses with a TV in them (notice how I belittle what is obviously an enormous step in technology, one that would have made Bond weep with joy only 5 years ago..).

The overlaying of virtual on real is one of my major excitement factors for where the web goes from here. As soon as you start getting stuff like Google Earth and more importantly Keyhole (now Google Earth Community) and Sketchup integration – UGC style – with that environment, the augmentation starts to gather weight as being not only exciting but useful too.

The obvious missing links are tantalisingly solveable, too. With “out and about” computing, the always-on data plan is fixing the “device is cleverer than network” issue. The remaining link – “where, exactly am I?” is nearly fit for purpose but not quite fit for purpose enough. GPS (if you have it) gets you accurate location, but as Tim says – not internally, not per floor of building, not centimetre accurate. There is of course cell location (accuracy maybe 300 m in urban locations, and available on any phone) but that isn’t cutting it, either.

I also posted about how a future where images could be knitted together and then used to create wireframed 3D environments on a map. Now chuck in the augmentation element – real time data overlaid on known location – and stuff suddenly gets very Minority Report indeed.

2 thoughts on “Everyware. Bring it on.”