QR seems to have taken on a bit of a life of its own over the past few weeks. Not only have I seen far more of the codes in the wild, but there seems to be many more people writing about it, many more news articles – and also (which is nice) – lots of people emailing me to ask how they can “do QR”.

QR is a great technology. Actually, no – it’s an ok-ish technology. The more important thing is that the awareness means gains in popularity, which in turn means more people will know what a QR code is, how to use it – and also make them aware of some of the foibles. As with anything, this isn’t about how awesome the technology is. Many, many geeky people will tell you QR is crap – which in some ways it is per se – but the important thing is market penetration, expectation, device support – and (most importantly), the content experiences which underly it.

Underlying the concept of QR though is something rather more important, which I think many people miss in their rush to play with the latest and greatest thing. The important thing is this: QR is a way of poking the digital world into the real world. In a way, QR is simply one technology in a line of technologies that does this. Remember the first time you saw a URL on a piece of print advertising? That was digital poking into real, albeit in a slightly crap way. Then bluetooth. Now QR.

Ultimately, the concept is the same in each of these cases: put a marker in the real world which allows your audiences to connect with content in the virtual world.

The technology with which you do this can be agnostic. This year it might be QR. Next it might be NFC or AR. The following – who knows, image recognition / hyper-accurate GPS / whatever. The facts remain the same:

First: People have to have a desire to engage with the marker in the first place. Why would you go to the effort of scanning a QR code with no knowledge of what that code might provide for you? Nina Simon just recently blogged about QR Codes and Visitor Motivation which asks this question. The cost curve – as always – has to balance: the value that your user gets out must be greater than the effort that they have to put in – and (almost more important), you have to make this value clear before they scan.

Second: A proportion of people will never take part / have the technology to take part. QR scanning (or – even more so – NFC or whatever the next big thing is) will be a niche activity for the foreseeable future. Bear in mind that not only does your user have to have a QR code reader installed, they also need the right kind of phone, an internet connection at the point of scan AND a contract with their provider that lets them use this connection. These things are becoming more real, but it is by no means a given yet.

Third – and possibly the most important – the content that you deliver should add something significant to their experience. This is tied to the first point. Here’s a banner I snapped when I was in London recently: 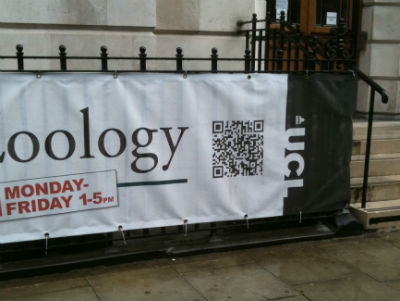 If you scan this you get a link to the UCL Zoology Museum (and ironically, out of shot to the left is the URL that the QR code sends you to..). From a user experience perspective, I bet you 50p I can get my smartphone out, type in the url and be looking at the relevant content quicker than you can boot up a QR app, scan and open.

In this instance, you do actually end up at a mobile-friendly site and some interesting links to QR technologies in use at UCL – which is fantastic. But the use case and motivation aren’t really articulated in the physical world.

Finally – you can easily put some measures in place to track usage, and use this to inform future activity. Here’s another example, this time from the British Library: 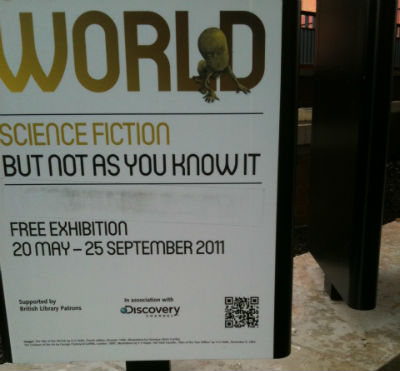 If you follow this link, you’ll find it goes to http://www.bl.uk/sciencefiction. The problem with this is that the URL is the same one as is being used on the poster, around the web and in all their other marketing. So when it comes to evaluating the use of QR – and whether it has been successful as a means to pull in new visitors – my suspicion is the BL won’t have any idea how to separate out these clicks from any of the others.

The simple solution to this is to use something like bit.ly and create a unique URL which is specifically for this QR code. More advanced techniques might include things like appending a string to the end of the URL (for example www.bl.uk/sciencefiction?source=qr) – or using Google Analytics “campaigns” to track these.

Coming back to the beginning of this post – the overriding point here is that QR, and many other technologies similar to it, provide a very exciting way of bringing digital content into the real world. With some upfront thinking, genuinely interesting content can be delivered in this way and users can be made to engage. As ever, though, it isn’t about the technology but about the use, motiviation and content which lies behind the technology. These are the things that count.