Streetmuseum – a rather lovely iPhone app by the Museum of London – launched a few weeks ago, and almost immediately began to cause a bit of a buzz across Twitter and other social networks. It’s hardly surprising that people have responded so positively to it – the app takes the simplicity of the Looking Into the Past Flickr group and combines it with cutting-edge stuff like AR and location-based services (think Layar++) to bring historical London into a modern-day context.

I caught up with Vicky Lee last week and asked her a bunch of questions about the app. Here’s what she had to say:

Q: Please introduce yourself, and tell us about your involvement with the Museum of London iPhone app project

I’m Vicky Lee, Marketing Manager for the Museum of London. As part of the launch campaign for the new Galleries of Modern London I’ve been working with creative agency Brothers and Sisters to develop a free iPhone app – Streetmuseum – that brings the Museum to the streets. 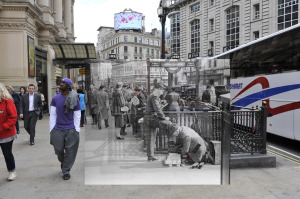 Q: Tell us about the app – what it does, and how you’re hoping people will use it, also about how successful it is being

Streetmuseum uses augmented reality to give you a unique perspective of old and new London. The app guides users to sites across London where over 200 images of the capital, from the Museum of London’s art and photographic collections, can be viewed in-situ, essentially offering you a window through time. If you have a 3GS iPhone these images can be viewed in 2D and also in 3D, as a ghostly overlay on the present day scene. The AR function cannot be offered on 3G iPhones but users can still track the images through their GPS and view them in 2D, with the ability to zoom in and see detail. To engage with as many Londoners as possible, images cover almost all London boroughs. Each image also comes with a little information about the scene to give the user some historical context.

What we bet on from the start was that users would enjoy finding images of the street they live or work on and would be quick to demonstrate this to their friends and colleagues – helping to spread the word about Streetmuseum but also raising the profile of the Museum itself, particularly among young Londoners who we have previously struggled to reach. We hoped that the app would spread virally in this way within days and it certainly seems to have worked as in just over 2 weeks the app has had over 50,000 downloads. It’s just been released in all international iTunes stores so we’re expecting this figure to rocket over the coming weeks. 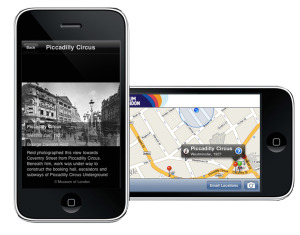 Q: Why did you choose to build an iPhone app as opposed to something else (Android, web, etc)

When I wrote the brief for a viral campaign to promote the new galleries and reposition the Museum of London, I had no idea we would end up launching an app. I hadn’t for one moment considered that we could afford to develop an app but Brothers and Sisters’ instinct from the start was that this was what we needed to change perceptions about the Museum. As soon as we understood how the concept fitted in with the overall marketing campaign (which also uses images from the Museum’s collections) it was the only option we wanted to pursue.
As with most Museum projects we were limited by budget so it was a case of either iPhone or Android but not both. To launch with maximum impact our feeling was that we had to go out with an iPhone app, therefore benefiting from the positive associations with the Apple brand and securing the interest of the media. We hope now to be able to secure funding to develop an Android version of the app in response to the many requests we have received.

Q: Can you tell us a bit about the financial model? Did you build it in partnership with someone else?

As a free museum reliant on funding, we would not have been able to create this app without collaborating with Brothers and Sisters. The partnership was mutually beneficial, generating media coverage for both parties and new business leads for the agency. Using images from the Museum’s collections meant that all the content was readily available so this kept costs down. Licensing agreements on certain images made it complicated to charge for the app, however it was always our intention to launch this free in order to reach the widest possible audience.

Q: Overall, what have you learnt about the process so far? 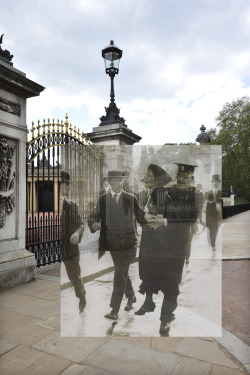 Simple works best. We originally planned to include user generated content but dropped this idea to ensure we stuck to our budget and timescale. Ultimately the idea is not that original but its simplicity has made the app an easy sell, both nationally and internationally.
I’d certainly give myself more time in future – we delivered the app in an incredibly short amount of time which gave little opportunity to review how it worked in practice. With more time we could have carried out user testing and refined the concept further to end up with an even slicker product.

Q: What else have you got planned for mobile at the MOL into the future?

We’re keen to keep the momentum going and stay ahead of the field, so, together with Brothers and Sisters, we are already looking at how we can develop this concept further. If we can secure additional funding we’d like to explore different subject areas and tie-in with future exhibitions and gallery redevelopments. Most importantly though we need to build upon what we have already achieved and keep evolving to ensure that any new apps continue to be newsworthy. We are also looking into the possibility of adding more images to the current Streetmuseum app and developing a version for Android phones.