Last week Kurt Stuchell did a potentially interesting thing by setting up a Ning site for Museums. He called it the Museum and Educational Social Network (MESN) and so far it seems to be gathering some traction as a place to interact about all things Museumy. With Facebook on everybody’s lips and screens at the moment, the Social Networking Site has never seen so much action, and it’ll be interesting to see how/if MESN develops.

The nice thing here is that the investment – at least financial investment – is zero. Ning lets you create social networks for free, so you can sling something out there and see what interest it gets without any developer or design activity. 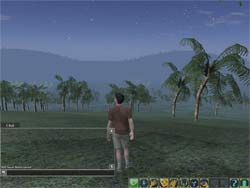 To date this has been a really big stumbling block for 3D worlds. Yes, you can create objects in Second Life for example, but you can’t create an entire environment which is yours and yours alone without having some really serious 6-zero figure in mind before you even start.

Multiverse is attempting to change that. On 2nd August, they announced the opening of their Virtual World Development Platform;

“…a comprehensive software solution that gives development teams the technology, tools and assets to create virtual worlds for almost any purpose, including games and business tools…“

Their business model is very Ning-like: they provide this platform for building 3D environments for free – the way they make money is by charging 10% of the end-user gross revenue. If there is any…

This is another fascinating slant on User Generated Content – as a business model, they will be relying almost entirely on end-users to cover their (presumably huge) original capital investment. As a self proclaimed Second Life cynic, (but addict of competing 3D social environment, There), it’ll be really interesting to see where this goes and how easy it *really* is to start building these kind of environments. I’ll play and let you know…

1 thought on “Multiverse…Ning for 3d worlds”