I’ve been very interested for some time in how you might go about tracking objects around a space, but I haven’t yet had a conversation with anyone in a museum who has actually done it.

This could well be because it isn’t yet do-able, or more likely I just haven’t found the right people to talk to yet. 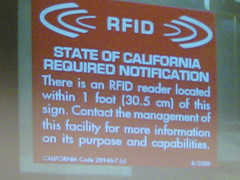 As far as I can see there are a number of technologies which could be brought to bear, including RFID (limited range, not so much “tracking” as “identifying”, and even then of variable usefulness in a museum system). The systems recently written about on the BBC, however, use a series of wireless network points to pinpoint items within a space. I’d already looked at one of the systems written about – Ekahau – but hadn’t got much further than a brief email correspondence with their technical team.

The Ekahu system requires that you set up a number of (standard) wifi network points and then do a survey of the space – you essentially walk around and the system then maps out the various signal strengths, building up a map of the room or gallery.

The nice thing about this system is that to a certain extent it uses existing technologies – you may have to extend your wireless network points and install some software but that’s about it. The failure is that the accuracy is limited to metres – ok for tracking “assets” (including people!) in hospitals or schools, but limited for on-gallery or object store room use.

Where I know many institutions fail on this front is that it isn’t clear at all who should drive an object-location project. It’s very much the domain of curatorial staff, but IT, new media and interactive teams are all obviously involved as well.

I’d love to hear about any projects that have actually been done using location based technology. I’ve done lots and lots of reading of papers suggesting various solutions but what I’m interested in here is real world application. Has anyone done it?

3 thoughts on “Object locating: have you done it?”