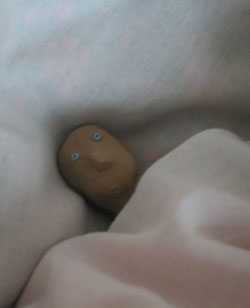 The yoof has been home two nights now (and a couple of days too, apparently, although it’s a bit of a blur) and I’m being reminded of what it means to not get a good nights’ sleep.

I have to say that it’s a load better it being summer time: Dan was born mid-December so once we were installed at home and had got Christmas out of the way it was pretty much January. And how shit is January, really? It’s dark, cold, cash-poor and you spend most of it with that post-Christmas “must eat salad and lose 10 pounds” feeling. Miserable. They should ban January, same as Tuesdays. (If I haven’t drunkenly ranted to you before about Tuesdays, here’s my theory: Monday = ok, still a blur from the weekend. Wednesday = ok, middle of the week and the end is in sight. Thursday = ok, pretty much Friday. Friday IS Saturday. Saturday and Sunday = obviously ok. Which leaves Tuesday. Rubbish.)

Anyway. Where was I? Oh yeah. Sleep.

The boy is starving all the time and, I guess not suprisingly, doesn’t much like being places other than lodged on top of me or Rach. Given he’s spent 9 months with loads of gurglings and heartbeats and body movement that’s not altogether suprising. Last night at about 2am I was lying there inventing a kind of artificial chest thingy to attach new-borns to, with a heartbeat sound, some breathing movement and a little body-temperature heater. What do you think? Can I retire yet?

So here I am writing a blog post. Dan is out shopping with the parents-in-law, and Rohan is in a sling just in front of me. Which proves I’m a new man, surely?

Everything certainly seems a lot less dark this time around, both mentally and I guess cos it’s not January, physically, too. Having Dan around is just so hilarious it takes the focus off the inevitable inward-lookingness of these first few weeks. But ask me again once the sleep-deprivation starts inducing hallucinations.