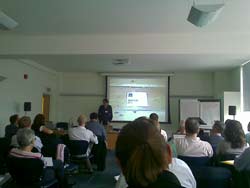 I’m at a one-day conference on OpenID and education, organised by Eduserv. I’m live blogging over on our new Eduserv PSG blog, and that’s hard enough to do in one place, let alone two so I have no intention of doing the same here 🙂

Just a quickie: during coffee break I had an interesting chat with Paul Walk who is a big advocate of OpenID – and has been using it for some time. We started a conversation about the notions of identity, attention data, the social graph, single sign-on, etc. It strikes me that the community is fairly bad at defining how these differ and where they cross-over.

I’m a bit of a novice when it comes to OpenID, but in some ways (he blags) that puts me in a good position: I’m a naive consumer of the service rather than a geeked out pro.

As I had understood it, OpenID seemed to be to be always sold as a single sign-on technology, much like Microsoft Passport (sorry, Microsoft “Live ID”..). The question I have is how far it goes beyond “just a sign-in” technology and moves into being an identity holder. Paul tells me that is exactly what it is, and that’s a relief – not least of all because identity is much more interesting than sign-on.

The second question I have is about where the line is drawn around identity. Is the fact that I’m married, for instance (a relationship on my “Social Graph”) a question of identity? Would this information be stored in my Identity profile? Would the name (or name of “node”) of my wife? Looking at it from one angle, I could argue that yes – this is very obviously identity information. From another, it isn’t..

Thirdly, where does attention data sit in this scenario? Over on AttentionTrust, they have a diagram which says “how we browse, what we say, what we read = me” which very much implies that Attention Data = identity. Paul (and others I got talking to) seemed to think otherwise. I’m not entirely sure why, but hopefully we can get some more talking in later on.

I’ve always had a soft spot for approaches such as FOAF, and that’s the final question: how do you map these relationships, and where do they “live” in the OpenID world? Where does OpenSocial sit?