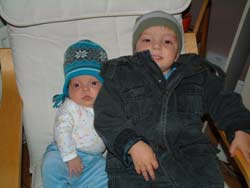 Wednesday marked a huge and momentous occasion in the life our son, Rohan: he turned 8 weeks old.

Important though each of these milestones is, 2 months is more important.

It’s the point at which you can start giving your children Calpol.

Who only knows what this magical potion has in it? It is probably a secret more closely guarded than the Coca Cola secret formula. If I was in charge of Calpol Inc., I’d be guarding it closely, too. Anything that can turn a screaming maniac banshee child into a calm, restful, sleeping one is worth [insert large sum here] to a parent.

So far (so far: remember, I’ve done this before, and I know damn well that TEETH – the bastards – are just round the corner..), Rohan has been an absolute star. But to have the safety net of Calpol is a huge relief.

There are people out there (normally those without children, note) who swear they’ll never 1) put their kids in front of the TV or 2) use pain-relieving drugs. To them I say , simply, ARSE.