Since the dawn of Twitter, the big question about the micro-blogging service has always been “but how will they make money?”.

To date, Twitter have taken a now-very-typical approach to this: rely on funding to grow a massive, engaged and dynamic community without worrying about the money, and then once the community is in place, apply the business model.

There’s three recent-ish developments that many people think point to the fact that things might be changing soon:

These things might look slightly disparate in nature, but the overall shift is one in which Twitter has more control over the stream of content emanating from the service. Tweetdeck is an interesting acquisition for Twitter in this sense – yes, it may  be an extremely powerful and widely-liked client but it also crucially allows users to filter what they see.

When you consider that the most likely business model for Twitter is to start populating the Twitter stream with ads, suddenly all these developments start to appear a bit more strategically connected. Once Twitter has control over the stream and has moved control away from client developers, ads are going to be much harder to filter. You can bet too that those incoming emails will be ad-populated before long too.

Clearly, any online business needs to make money or at least be self-sustaining, and having burned through a big pile of VC money Twitter is going to be looking to claw back wherever they can. It’s lovely that Twitter is free and not filled with ads, but it is also unrealistic to think that this might go on forever.

Working on the assumption that things are going to have to change, where does that leave the user? Talk of heading off to Identi.ca or other microblogging services is unrealistic; Twitter has (and knows it has!) a huge critical mass. The only other offering on the horizon (albeit what looks like a distant horizon) is Diaspora – a lovely model (you own your own stuff) but again totally lacking in real-world usefulness right now.

We’ve all invested hugely in Twitter. It’d be very hard for many of us to imagine life without it – but we’ve all bought into a service which is a commercial service, and one which is subject to the whims of profitability.

So – back to the title of the post. What if Twitter goes rogue – and by “rogue” I mean “starts doing something that you personally find unacceptable” (so for the sake or argument, imagine a scenario which makes you wince, be it ads in-stream / membership fee / company bought by the Chinese / content moderation at source / etc). What then?

Personally, I think I’d pay a membership fee in order to use the service. I’d also likely pay in order to not have ads in my stream. What about you?

Before the brave new world of cloud computing, selling and buying software was a pretty straightforward thing. It’d either be shareware, in which case you’d download and walk away, or there would be some kind of time- or function-limited demo which you’d (if you liked it) upgrade at some point in the future.

Since stuff went cloudy, life has got a little bit more complicated in the world of the software business model. Recently, I’ve happened across a number of services that approach their business models in different ways, and I thought it’d be interesting to compare and contrast. 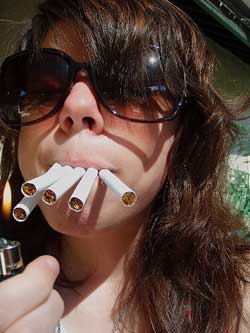 One of the models that has now become popular carries the buzzword “Freemium”. It’s essentially not a whole lot different from a downloaded bit of software which is functionally crippled in some way. In the Freemium model, something is provided which allows the end user access to free stuff, but a lack ultimately convinces them to upgrade to some kind of paid – “premium” – service. A classic example is the widely-lauded hosted project management software by 37 Signals, Basecamp. You’re encouraged to sign up for free. Your account then gives you access to a limited version of the software. In this particular instance, you get a single project and no file uploads, but apart from that everything is the same as the paid version. The unpaid version gives you enough of a glimpse into the functionality and usefulness of the tool to realise that the additional functionality provided by the paid version is likely to be useful.

Another example is SugarSync, the cloud file-syncing service. Interestingly, while they used to have a “get 2Gb free” freemium model, they have now reverted to “10Gb for 45 days” on their free plan. We’ll examine why in a moment.

The Freemium model is based around something I’m going to call limiting addiction. The service provider is attempting to find a fine balance between provision and lack of provision of service. In the Basecamp example, 37 Signals are looking for users to find the service useful enough that they see the value, but not so useful that they’ve got enough with the free version. In this particular example, they’ve got things right: a single user without file upload ability gets you far enough to see the value of the service, but it isn’t enough that you can actually run any projects usefully. Net result? You upgrade to premium.

Let’s examine SugarSync now. When they first launched, they offered a time-unlimited 2Gb of storage space under a free account. I don’t know the inside track, but I’m betting that users found the service too useful – 2Gb is after all a fair amount of synced disk space – and I’ll bet that not enough of them were upgrading to the premium editions. The Freemium model in this case offered too much for nothing.

In the last couple of days I’ve signed up for a service called Spotify. It’s a downloadable app which lets you stream pretty much any music on demand to your desktop. I love the service, possibly more than anything I’ve come across this year – I’m an avid last.fm and Seeqpod fan, but Spotify goes a step further – it is fast, reliable, content rich. It is pretty much the perfect music application for me. The Spotify business model is interesting: you can get music for free, but it is ad supported: every 3-4 songs there is an audio advert. To remove this you can either pay 99p a day or £9.99 a month.

All well and good. But (and I hate to say this in case they’re reading..), Spotify is offering too much for free. The ads just aren’t annoying enough or frequent enough for me to bother paying the premium. The value is – like with the original SugarSync model – too high. I’m addicted, but not limited by the free version of the software. I’m a customer waiting to happen: If those ads were more in my face – if the software was more limiting – I’d almost definitely pay to get rid of them. I’m sure Spotify will get this right in the end: they’re currently still in closed beta and are very early into their market, and I’m delighted that I get so much value for nothing for the time being. If they’re savvy, though, they’ll continuously tweak their business plan as time goes on until they have the perfect freemium balance. And what is that balance? Well, a high addiction -> limitation -> upgrade rate.

There’s one more example that I’d like to look at, and this one fails for reasons that I’ll highlight in a minute. This example is a web prototyping tool called Protoshare. Rather than opting for a Freemium / functionally limited model, they’ve gone for a 30 day free trial. During that 30 days, you get full access to all the functionality – but after that you have to pay.

Again, all well and good. However, there’s a subtlety here which I think Protoshare have missed. It’s this: People like me who do IA work for a living tend to do stuff on a client/project basis. This means I have two options when it comes to Protoshare: I either start the 30 day trial at an arbitrary (between projects) time – this is fine, and pressure-free, but like most people if I’m not using a tool for a specific purpose, I don’t fully evaluate it under real-life conditions. The second option is to use Protoshare for a specific project. In this scenario, however, I’m putting myself way out on a limb – I haven’t had a chance to test the software before committing to it, and there’s no way I’m going to do a bit of paid (and timetabled..) work for a client without using a tool that I know and trust. Net result? I walk away from a product which could be exactly what I need – and would pay for. If Protoshare had a limiting addiction model, I’d probably have signed up by now.

There are infinite ways of cutting the Freemium business model: you can do it around paid support, functionality, disk space, speed, look and feel, etc. The extent to which various facets of the software are measured and valued is key, and – as the Protoshare example shows – really quite subtle as well. It’s not a case of “X has value Y, do Z” – it is more about considering the software against the likely market, users, use scenarios and so on. Ultimately, though, all these approaches are about giving a taste of something which tempts to an extent that you want more, but doesn’t satisfy. If you fail to tempt enough (Protoshare) or satisfy too much (Spotify), it’s very likely that you’ll either miss markets, or revenue, or both.